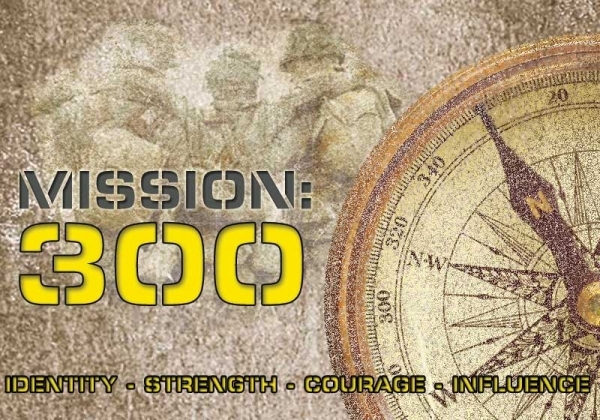 History has stumbled through with both legend and history of what happens when 300 men unify and are committed to something bigger than themselves. It has led to the reality of incredible odds being overcome.

Our story begins when over 4,000 years ago 300 men were separated from an army of 30,000. The men were filtered to a small group of young men that could overcome their fears for the sake of the one whom he stood beside, discovered how to look beyond themselves and see something great in the face of impossibilities. This does not come by accident, by providing mentors that will assist them discover who they are, drawing on their strengths and standing with them in confident belief as the venture into new areas of life.

“By the three hundred men who lapped I will save you, and deliver the Midianites into your hand. Let all the other people go, every man to his place.” Judges 7:7

The program provides fathering mentors for young men 15-24, in which we are able to inspire a solid, engaged and interactive group with a passion to positively and courageously influence others. The program not only helps the participants to grow in confidence, but also involves the participants in developing solutions for other young men in complicated circumstances around the world.

Our program is built on four pillars that have been discovered in over twenty years of working with those affected by fatherlessness: IDENTITY, STRENGTH, COURAGE AND INFLUENCE. The end objective has been young men discovering who they are, their strengths and a platform for them to courageously influence the world around them.

Our program currently operates in multiple locations in Thailand and the USA. In March of 2015, Mission: 300 was officially adopted as the development program for the DOP Juveniles in CM. Later in May, our program was adopted by the Juvenile Prison System in CM. We are also being observed by the Thai Ministry of Justice to implement in other areas where the issue of fatherlessness has affected the country. Over the last six years, we have been recognized as a major factor in the recidivism rate in the provinces we operate.

The results of the participants in our program has been better fathers, husbands, and leaders in their community and world.

Thank you for partnering with us as we continue together to introduce the father to a fatherless world.